Where Do Conservatives and Liberals Come From?

And What Ever Happened to Life, Liberty and the Pursuit of Happiness?

A Return to Common Sense: Reawakening Liberty in the Inhabitants of America – Thomas Mullen 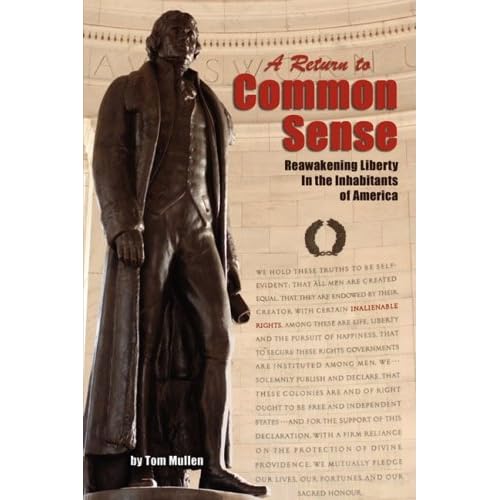 “Thomas Mullen is a knowledgeable and passionate libertarian and A Return to Common Sense is a valuable addition to the libertarian literature. Those new to the freedom movement will benefit from Tom’s introduction to both the practical and moral arguments for freedom. Long-time activists will benefit from Tom’s explanation of why strict adherence to principle is vital to the
future success of the liberty moment.”

– Representative Ron Paul (TX-14) Congressman and author of The Revolution: A Manifesto and End the Fed.

“A well written primer on economics, liberty, and government that even avid Austrians will enjoy.  If you have been blinded by government and Wall Street propaganda, A Return to Common Sensewill help open your eyes.  I not only recommend that you add this book to your freedom library, but that you buy a few copies for your friends.“

– Peter Schiff, President of Euro Pacific Capital, Inc and author of Crash Proof: How to Profit from the Coming Economic Collapse.

“In a time of national crisis, everyone is looking for the right politician to solve America’s problems. A Return to Common Sense proves that it is not just the wrong people, but the wrong philosophy that has corrupted our government and derailed our freedom and prosperity.  Like Thomas Paine’s original, this book clearly and simply explains the timeless philosophy of liberty in language that every American will understand.  The road back to freedom begins with A Return to Common Sense.”

One thought on “Books”